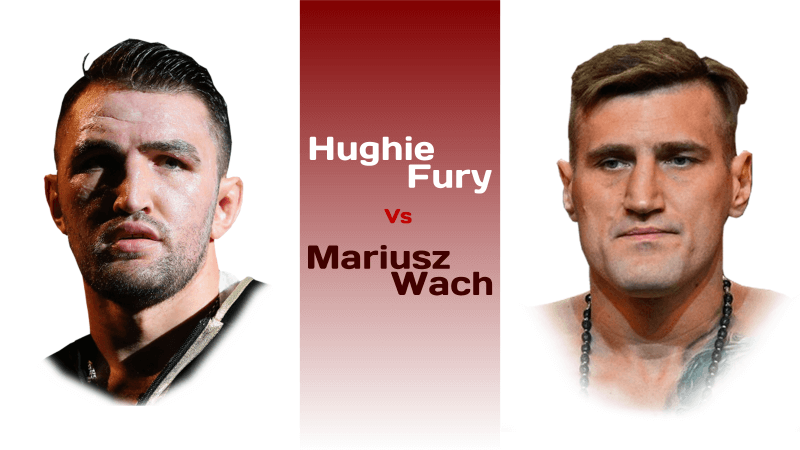 Hughie Fury finds himself in an interesting fight on the undercard of Anthony Joshua’s world title defence against Kubrat Pulev on the big O2 Arena card on Saturday 12th December. Fury faces former world title challenger Mariusz Wach. The fight will be shown live on Sky Sports Box Office in the UK and streamed in other territories by DAZN.

Wach has lost 5 of his last 10 outings so will be seen by many as a fighter going through the motions to get the last decent paydays out of a once-promising career. Wach ran up a 27-0 career slate before challenging Wladimir Klitschko for his heavyweight titles in Altona, Germany in November 2012, losing a unanimous decision. Subsequent losses to Alexander Povetkin, Jarrell Miller, Artur Szpitka, Martin Bakole, and Dillian Whyte may not look too bad considering that each one was ranked very highly, but a loss is a loss after all.

There does still seem to be desire in Wach though. His clash with Whyte in Diriyah, Saudi Arabia on the Joshua vs Ruiz II undercard showed that he can still hold a good shot and come back firing. Much was made of Whyte’s poor condition, but Wach had little notice and still put on a decent showing. The Polish native went on to clearly outpoint Kevin Johnson six months later.

It feels as if Hughie Fury has been around a long time but the Manchester giant is still only 26-years-old. Hughie does have some decent names on his resume but on close inspection, only his 2015 ten round points win over Andriy Rudenko stands out. Rudenko was 24-1 at the time and a very solid heavyweight. Fred Kassi was another decent heavyweight but a bit of a gatekeeper type by the time he faced young Hughie. But each time fury has been stepped up to the top level, he has failed to deliver a performance that suggests he will one day belong in the world top ten.

Joseph Parker outpointed Hughie in a world title challenge that came too early for the Manchester man. Kubrat Pulev then outpointed Hughie over 12 rounds in Sophia, Bulgaria, before Alexander Povetkin showed the gulf in talent between the two in August 2019 on the Lomachenko vs Campbell undercard at The O2, London.

At 6ft 6 Inches, Hughie has the athletic ability, stamina, and boxing ability to beat all but the top ten contenders, what he lacks is physical strength and punching power. When he realises that he cannot hurt his opponent, Hughie goes back to skating around the ring trying to hit and not take anything in return, a tactic that will never win fights against the best.

In Wach, Fury meets a man his own height and reach and with plenty of experience. If Wach turns up in shape and with the fire in his belly that he showed against Whyte then he may make for a tough night for Hughie. That said, youth does normally prevail and at 40-years of age, Wach has seen better days.

Prediction: Fury to win on points in a tough fight.